All the things you always wanted to know about Conkle’s Hollow — but were afraid to ask.

What is this place? 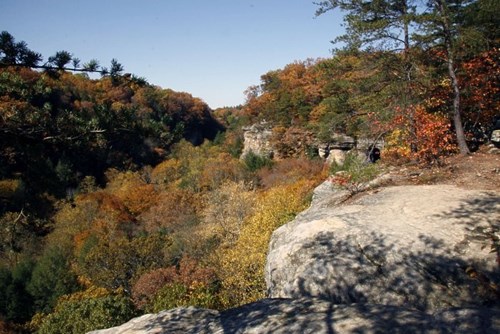 Is it a cave? Is it a cliff? No, it’s a gorge. This is what makes Conkle’s Hollow so unique. As you hike along the quarter-mile Gorge Trail you are flanked on both sides by cliffs rising 200 feet above you. The farther along you go — the more the gorge narrows — only 100 feet wide at one point. Said to be the deepest gorge in Ohio, you can’t help but feel like a tiny ant moving beneath massive, looming cliffs. And like any curious ant, you may think, how do I get up there? You can if you choose the half-mile Rim Trail. Warning: This is a seriously scary (but awesome) hike, and you’ll want to be very careful. You basically walk along the cliff’s edge on a rocky, rugged trail. Wear the right boots and keep your balance! 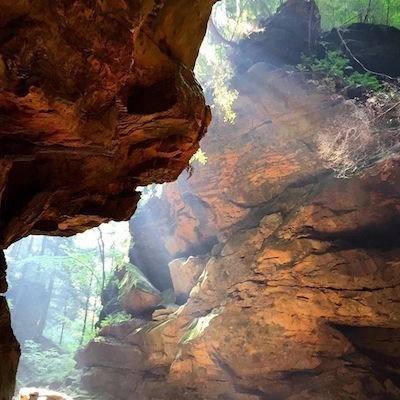 “What is a Conkle?” might be your first question when it comes to this Nature Preserve in Hocking Hills. Talk about an original “tag”: The site got its name because a settler named W.J. Conkle carved his name and the date (1797!) into the sandstone on the west side of the gorge. Since eroded (sandstone erodes easily and these cliffs are forever changing with weather and rain), we still love the idea of that feisty settler. 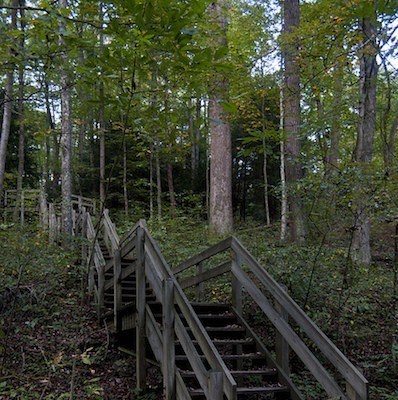 Legend has it Native Americans stole treasure from some settlers. Looking for a good place to stash the goods, they spied a cave inside one of the Conkle’s Hollow cliff walls. Using a tall Hemlock as a ladder, they hid their treasure in the cave, then knocked the tree down to cover their tracks. One tall tree remained that they planned on using later to retrieve their treasure. Carefully marking the spot with an arrow carved into the cliff wall, they knew they’d find their way back to the right cave. Unfortunately, when they returned later, the second tree was knocked over. With the cave so high up and no trees around to access it, legend has it they left the treasure and to this day it remains hidden within the Conkle’s Hollow cliffs.

Feel like looking for the treasure? Beware! Legend also has it that ghosts of the caught thieves, who were hanged, roam throughout the gorge. 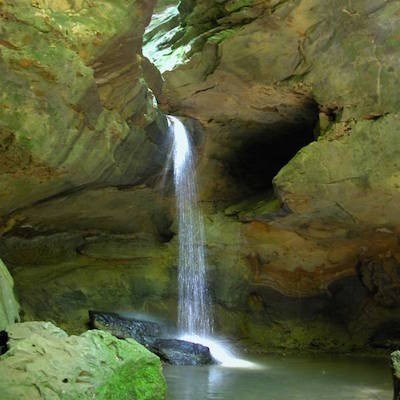 After it rains there will be falling water throughout the Gorge Trail. You can imagine all the rainwater cascading through all the high, rocky walls. The most spectacular comes at the end, where you’ll find a 20-foot waterfall. 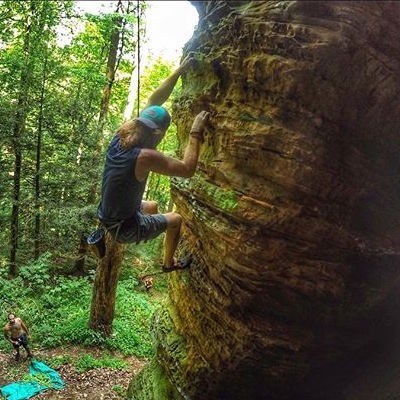 A rock climber’s dream: Conkle’s Hollow has hundreds of rock faces of all shapes and sizes with your name on them. But you’ll want to stay within the regulated climbing areas designated by the park.

We know it’s hard to drag yourself away from the pristine peace and beauty of Conkle’s Hollow. Snag a Hocking Hills cabin at the nearby (very secluded!) Harvest Moon Cottages, and explore the area for longer. You’ll be glad you did.