We betcha don't know this about Hocking Hills

Explore Hocking Hills myths and lore ahead of your trip

If you’re planning a trip to Hocking Hills with pals, it always helps to know the area. So you can tell them about facts and activities. So you seem smarter.

Read on to explore some of the area’s myths and lore ahead of your Hocking Hills getaway.

Who is the old man in the cave anyway? 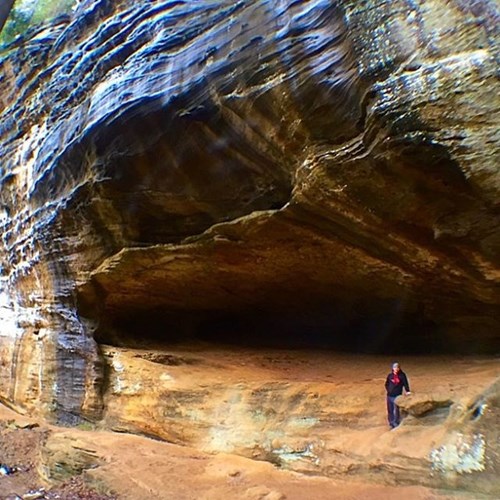 Richard Rowe, a trapper and Tennessean, was a bit of a hermit who was known to frequent the area. Rumor has it that, while using the butt of his musket to break a hole in the ice, the loaded weapon went off accidentally. Rowe received the musket ball under his chin and expired. Two other woodsmen found his body and buried it as best as they could.

According to legend, the hermit Rowe had been burying his savings in the area of the cave for years; thus the Old Man of the cave’s name may have left his treasure unintentionally interred in the area. (Please do not use this legend to justify tearing up the forest, and stay on trails for your safety!)

Those aren’t cedars at Cedar Falls 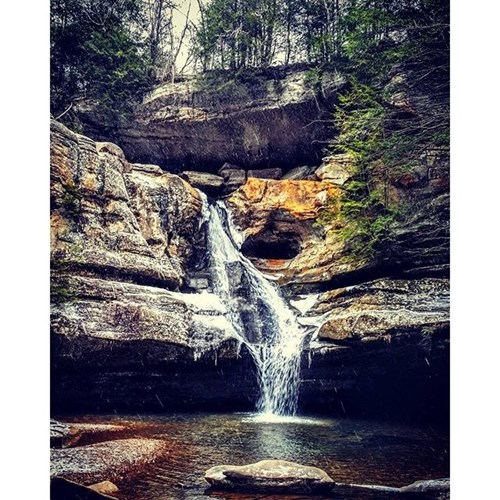 While the Inn at Cedar Falls is surrounded by beautiful and ancient trees, they aren’t cedars at all.

Ancient settlers mistook the majestic hemlock trees that garrison the area for the cedars more common to their own point of origin. And oddly enough, the hemlocks aren’t really hemlocks: The trees were named because their leaves, when crushed, smell similarly to poison hemlock.

Socrates was killed by conium maculatum (poison hemlock); these trees, however, are a kind of pine, known in Latin by tsuga. (To “however” you yet a little further, real hemlock also proliferates in the area; look for a tall flower similar to Queen Anne’s Lace that grows in the border areas between the woods and the meadows. Don’t eat these toxic relatives of the carrot, but tell your companions what they are, that you may seem wise.)

Nature is resplendent with esoteric mathematics, which led architect and mathematician Akio Hizume to design the Democracy Steps from the Inn at Cedar Falls down to the falls themselves.

Much of nature, from complex insect colonies to the formation of leaves, can be described by the mathematical concept of the Fibonacci Sequence (popularized by Dan Brown’s book, “The DaVinci Code”).

Drawing on that, Hizume’s steps are designed to coax walkers into alternating the leading foot, helping the ascent and descent feel more like a pleasant stroll than a grueling hike.

What formed these Hills?

Like a great many of the nation’s natural wonders, the incredible formations of the region were formed largely by the action of glaciers (and their melting, carving action) in prehistoric times.

The specific reason for the stunning formations, however, is attributable to an even more interesting geologic situation: the Black Hand Sandstone, a layer of strata that extends through the area. Both the top and bottom of the layer are firmly cemented, and therefore very resistant to the eroding forces of the springs and creeks that criss-cross the area. The middle layer, however, is much softer, and therefore much more susceptible to being scoured away.

The Devil’s Bathtub is really more of a latrine 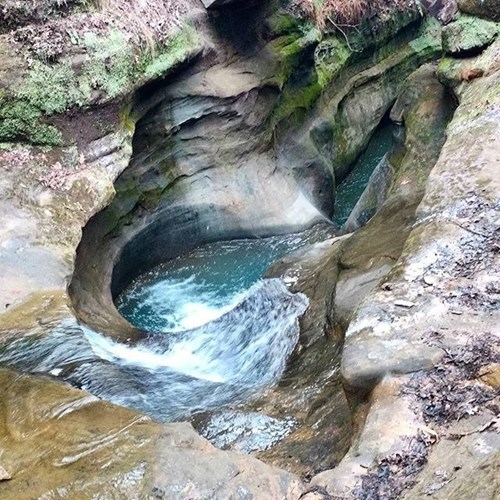 The creek rushes through a hole in the bottom of the pothole itself before making its way down to the creek’s next level in a beautiful waterfall, one of the most interesting in the whole park. Lore says it was named because the hole reaches all the way to the devil's home, Hades. But in reality, the bathtub's only a few feet deep.

The Rock House has long been a popular “canvas” 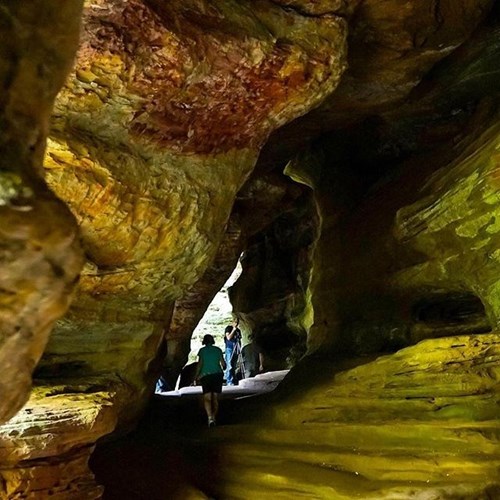 For as long as travelers have made the trek to the Hocking Hills, the Rock House formation has seen regular visitors — and, while tourism is a relatively recent phenomenon, trappers were familiar with this and many of the area’s other spectacular rock formations.

Like the trappers who would antecede them, tourists have been carving their names and other literary litter into the walls of the formation for well over 100 years. (Though it might go without saying now, you should avoid doing likewise.)

One of the most interesting screeds is an extremely long abbreviation: “I.T.F.B.R.B.A.R — I.T.F.F.A.W.M.T.A.W.” Inscribed in the rock over one of the doors of the Rock House, the letters stand for "In the fall Buck Run bananas are ripe — in the frosty fall a wise man takes a wife." Buck Run Banana was long the local name for the fruit of the pawpaw tree.

There’s nothing “wrong” with Queer Creek 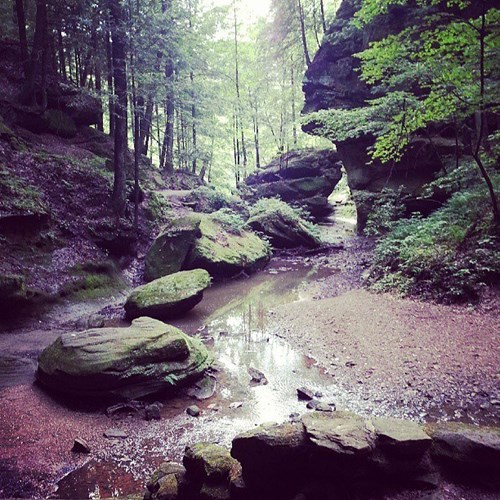 The creek that goes over Cedar Falls has been called Queer Creek for more than 150 years. While naturalists will often say the creek flows the “wrong” direction, it does not; it flows nearly due west, exactly the same direction as all the other creeks on its side of the valley. So there’s nothing all that queer about it. *shrug*

The Shawnee weren’t the first Ohioans

The white settlers learned of the Hocking River’s name, the “Hockhocking” (although probably not really spelled that way!), from the Shawnee Indians, who named the river because of its bottle shape.

But even the indigenous peoples found by the newcomers were hardly the first to live in Ohio. An ancient people, the Adena, preceded just about everything.

The Adena Mound, found near the town of Chillicothe, was one of many sophisticated burial mounds the Adena built to honor their deceased … and that’s just about all we know about them, as they lived in the area around 1,000 years BCE in what archeologists refer to as the “Early Woodland Period.”

The region is home to several species of plant that shouldn’t really be there, including the bigleaf magnolia, which is native to the southeastern United States and eastern Mexico. This species boasts the largest simple leaf and single flower of any native plant in North America and, while rare, does grow in the Hocking Hills.

Due to its oversized leaves and jumbo magnolia blossom, you’ll have no problem recognizing it if you see it, but actually finding the plant may take a little doing — the Hocking Hills is considerably outside the plant’s normal range.